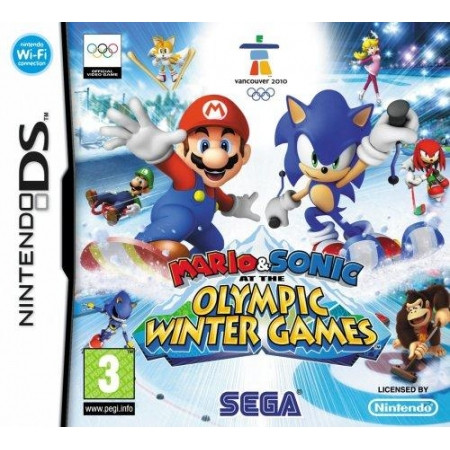 Beschreibung Bewertungen 0
Beschreibung
The biggest Olympic superstars are back and the only country they're representing is video game... mehr
Menü schließen
Produktinformationen "Mario & Sonic at the Olympic Winter Games - MODUL ** (Nintendo DS, gebraucht) **"

The biggest Olympic superstars are back and the only country they're representing is video game land. The team-up that fans could previously only dream of is back, as the worlds of Mario and Sonic the Hedgehog combine at the 2010 Olympic Winter Games in Vancouver.Following the same format of the 2008 summer games tie-in you and your friends can choose to compete in authentic Olympics disciplines as everyone from Mario and Sonic to Bowser, Dr Eggman, Yoshi and Tails.Only a few disciplines have been revealed so far, but already we know that the game is going to contain ice hockey and figure skating. There will also be new fantasy events such as Dream Ski Cross, which sees everyone competing in a Mario Kart style race complete with familiar looking power-ups and speed boosts. Realism isn't the goal here, just good old fashioned multiplayer fun.